You Call This a Vacation? 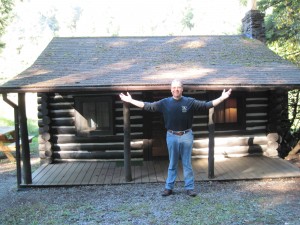 Here’s how I spent last week. No cell phone. No TV. No wi-fi or internet coverage of any kind. No communication with the outside world. If you want to “chat” with somebody, you have to do it face to face and in person. Is this the end of the world? No, it’s a little known place in Pennsylvania where it may be 2012 on the calendar but it is still in the 19th century in the woods.

Cook Forest is a state park in western Pennsylvania that my parents discovered in the 1940’s. They started vacationing here with my three siblings long before I was born. I remember vacationing there as much as three times a year. A weekend in the spring when the rhododendron were in bloom; a week in fall at the height of the fall colors; and many times a whole week in the summer time when I got to bring a friend. I even honeymooned here and later brought my daughter, who much later, brought her husband. This place has been a family favorite for over 70 years.

It’s not really camping but it is as close as I will ever come. We stay in a small log cabin constructed out of, well, logs. It is only one room unless you count the indoor bathroom which is a requisite necessity wherever I travel. If you add the small kitchenette, we have a log-suite but it remains quite rustic. It’s camping with a hard roof over your head and a bed that doesn’t have zippers or mosquito netting.

Hiking is the thing to do when you are in the woods and boy did we hike.

Each day we hiked three miles up hills and down hills and then up some more hills. We went up far more than down so I can’t figure out how we wound up on the same level at the end of the day. The Allegheny Mountains are beautiful but not really mountainous like the Rockies or the Alps. They are mountains in name only because “mountainous” is a much better tourism sell than “really really hilly.”

On our hike I saw something that I remembered from my youth. In the middle of the woods, the park built a memorial fountain honoring all of the initial board members who worked to get this declared a state park in 1928. It  was a nice gesture, but a sign on the fountain kind of ruined the moment. The sign read “This water has not been tested safe for drinking.” Well what the heck good is a drinking fountain if the water is toxic. I am not looking to join the dead founders recognized on the fountain by drinking their tainted water.

In the evening, as we were watching the fire I built in the fireplace and just enjoying each other’s company, a noise from outside caught our attention. It was the noise of a garbage can being tipped over and rummaged through by an animal. This was followed by a growl that seemed to come from the bowels of the earth. My wife and I looked at each other with WTF expressions and my first reaction was to shut the door to the cabin and pile furniture in front of it.

Next, being the brave frontier soul that I am, I retreated behind the cabin door, locked it, and started to look for things I could use as weapons to fend off the pending attack.

A toilet plunger, that would be good. It could be used as a club or truncheon, while the mere disgusting factor would surely drive the beast away. I also found a floor lamp, a frying pan, and a butter knife to use as backup. Fortunately – for the beast – he knew enough to retreat from whence he came rather that face the wrath of Plunger Man. Meanwhile, my fire was dying down and the wood pile was outside where “it” was. I decided instead to burn the plunger.

After the vicious garbage attack, it became very quiet in the forest, something a resident of the city is not used to. Quiet is usually replaced by sirens, cars horns, and the occasional gun shot in the city but here it was so quiet you could hear your heart beat. Have you ever tried to sleep when the only noise you can hear is your own heart beating? It’s not normal.

The intense quiet also prompts a person to sleep for a long time. With no alarm or traffic noise, to wake me up, I slept until 10 AM, something I haven’t done since college.

We hiked the trails every day, traversing several mountains, or at least sizable hills and

on our treks spotted 28 deer. On one hike I spotted a porcupine. Yes, that’s right, a porcupine. I had never seen one of these little devils before and it seemed quite docile seeing as how it was armed with hundreds of razor sharp killer-death quills. In a rare philosophical state, obviously caused by the forest primeval, I determined that the porcupine is really a reflection of life itself because like life, it is quite amazing, but also like life, you have to watch out for the pricks.

After hiking it was back to the basics of fire making. dinner preparing, and of course, figuring out how to put up with the blasted quiet. Relaxation has its limits.

2 Responses to You Call This a Vacation?