A View Of Christmas Past

At this writing, we are only two days away from Christmas, a time of joy, family, and gifts 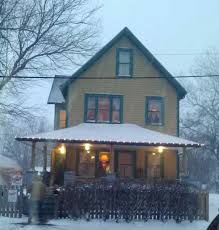 that need to be returned. Over the years, Christmas hasn’t changed, but all of the accompanying traditions have, and as a card carrying member of the Boomer Generation – Yes, I carry a card, it’s Medicare – I get nostalgic about Christmas. I started to compare the differences between Christmas 1959, and Christmas 2019. When I grew up in Cleveland, Ohio, Christmas was something special. If you ever saw “A Christmas Story” you saw where I lived. The Christmas Story house is open to the public (for a fee of course) and is about 5 miles from where I grew up. In fact, my nephew currently lives in the house I grew up in, and it is also open to the public…for a fee.

But alas, the power consuming lights of old have been replaced by green options like background projectors and inflatables. The giant inflatables are always snowmen, or Santa, or Olaf. I have never seen an inflatable nativity scene, but perhaps that’s a market I should look into.

As far as I’m concerned, if you are going to have inflatables in your yard, it is your responsibility to keep them inflated 24/7 during the season. If you pull the plug in the morning, the inflatables collapse, and your property is littered with limp plastic that looks like Santa’s  been shot and Frosty melted. Try explaining that to a small child.

Back in the boomer years, our Christmas trees came in two varieties. You had either a live tree, which was an ironic term considering the tree died when it was cut. You got it from the neighborhood lot. The other option was an aluminum tree that you got from Sears.

Live trees were decorated with lights and ornaments and tinsel. The aluminum trees were illuminated with a spotlight that had rotating colors. They lacked ornaments, and tinsel would just be redundant.

The tree I have now looks very real and is made of some sort of polymer substance developed in China. The lights are pre-strung on the tree and they operate with a remote control. I have to salute technology on this advancement.

Back in 1959, every major department store had a Santa that you could visit, for free. Today, there is one Santa per mall and there’s usually a charge. The thing I could never understand as a kid, was how Santa could be at every store at the same time. I asked my dad, a Teamster, and he said, “It’s a union thing.”Then it made sense.

I remember spending a lot of time in church at Christmas when I was a kid. There were services on Christmas Eve, and Christmas. And if Christmas fell on a Tuesday or a Saturday, you’d be in church three days in a row! As a kid, that’s a lot of church.

All things considered, Christmas hasn’t changed much, because in 1959 as well as 2019, we all know that when Christmas is over, everything is going to be on sale.

These are my Christmas memories from the boomer years. I’d love to hear yours. dale@DaleIrvin.com.